Just re read France Miniature blog…  Didn’t mean Disney Peking!!  Now that would be a long walk. I meant the parking lot at Disneyland in Anaheim.

France Miniature.  Yup. Exactly what it says, it is.  A big park with miniature buildings from all the various regions. 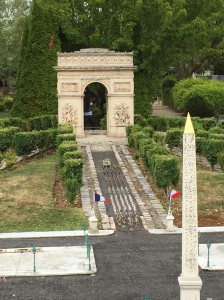 And getting there was a new travel experience. To get there you have to take a transilien line. These are trains with alphabet names, like Ligne U.  It’s not the RER. But it was fine and because there are no zone charges from mid July to mid August for holders of a monthly Navigo carte (me) (don’t know why) it’s free (ok so not free In the sense I paid for a monthly pass but it’s included).  So train out. Then a bus transfer (also free!) and half mile walk. You get left by the bus pretty much out in the open. But it’s probably no further away than the farthest spot in the Disneyland Peking lot. Except Disney has shuttles.

I loved FM. It just made me happy with every step. Not quite sure why but I was.  Found the Miniature of the cathedral at Lourdes.  People had thrown pennies at the fountain, like one of those good luck fountains.   The grotto where she had her vision.  Made more sense to be at the right spot.  It was set up there for some kind of ceremony, with their little people.

I tossed  I thought I tossed gently, but I did have to get quite a distance so maybe I had my arm into it.

I took out a priest. The penny hit him in the chest and he fell over.  The nun’s ok.  Not sure what this means for my wish…

And that’s Le Tour not La Tour. The latter is a tower as in La Tour Eiffel.

Plans made lounge chez moi on Sunday (26/7) (yes, European 26th of July) morning. The last stage of the Tour de France starts at Sevres which is just south of me. Part of the department Haute de Seine. Then they go round about and through the woods. The Bois de Boulogne where I rode a bike in an earlier blog.  And then into the city of Paris at Porte Maillot. My metro stop and then on through Paris to conclude with 10 circuits from the Louvre to the Arc de Triomphe. I decided to watch the beginning on TV. Quite like the pre shows for the Super Bowl.  But not. Interviews. Some singing. Certainly not Madonna or Mick Jagger.

Then just when the stage should have been starting – or so I thought – they cut to cyclists riding down the Champs Elysées in the rain.  Ok what?  Maybe a previous tour.

Just showing how rain impacts them. But no. It’s live.  Well I can’t miss this so I get dressed and run out the door to my go-to metro (George Cinq) for anything happening on the Champs Elysées.

Yup. Barriers in place.  People lined up (not as many as I expected) and r
iders going by fast! I found a place to watch. Noticed one rider with a pony tail. Huh? Hippies in the tour?  Possible.  Another circuit.  More pony tails.  Huh?  And on the next circuit I see boobs.  It’s the women’s race.

So I wander around. Saw two guys who brought ladders for a better view.  And around the Arc  there are many sponsor tents and stands. Carrefour (a supermarket) was giving away food- nuts drinks cookies.  And even shucking mussels.  Do you shuck them?  It is that just corn?

An enterprising group had roped off their spot on the barrier and had a sign 10 euro for entrance.  How entrepreneurial is that?

I got a red polka dotted cap- it’s for the King of the Mountain – best climber.  I didn’t buy any TDF paraphernalia – too yellow.  Not my color.

And then the rain starting coming down quite hard. The guys wouldn’t be there for several hours. I headed back to Port Maillot. Found a nice pedestrian fence to lean on and against for the next 3 hours

Hard to believe it was 26 of July especially after the canicule. Maybe 60 out. Windy. Rainy.

The Caravan comes first.  It’s a parade of the sponsors. Our U.S. Counterpart is the Oscar Meyer wiener-mobile.  Bic pens has six cars. One’s a lighter. The others Pens. There snow on top of two cars with skis sticking out.  Baguettes and other things. Tires. And a care that looks like a Madeleine cookie… 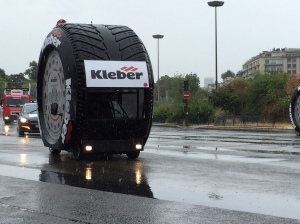 Then nothing after that excitement except the occasional moto or police car.  Then at 17:45 the cyclists arrive! (Arrive is a difficult word here.  J’arrive means I am coming 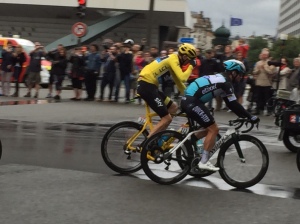 Je suis arrive means I arrived.). It’s 45 seconds or maybe a minute from first spotting them til they turn up Avenue de la Grande Armee to enter Paris. Got a photo of the yellow jersey so I have proof.  Now I can check that box.  Tour de France Done.

Came home and put on a cashmere sweater and my fleece jacket. Brrr