First, let me say that I maligned the industrious workers across the street.  Indeed, they did NOT take Monday off as I posted in the morning.  But I think some must have slept in.  I saw the offices fill up by noon. And one poor guy was working by himself til after 9 last night.  Last year I did see a team of about 6 people work all through the night (I woke up and checked on them at 4 am – still there). 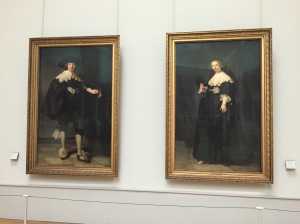 Today after my Wednesday conversation in the area, I dropped by the Louvre.  A friend told me about these two full-length portraits done by Rembrandt at 28 years old.  They were privately owned for years. In 1877 Willem van Loon’s collection (descendent of the couple) was sold.  The Dutch tried to buy them but were outbid by the Rothschilds who brought them to France  and rarely exhibited them. (last time in 1956.)

This year the paintings came up for sale.  Don’t know why, but the Rothschilds decided to sell. Short of cash?  And they had to get permission from the French government to “export” them as the paintings are considered a national treasure – even if only the Rothschild family and friends got see them daily.

Of course, both the Dutch and the French Rijksmuseum wanted them.  In a very smart move, the two countries bought them together.  I understand the sale ended up at the level of a treaty between the two governments.  The Dutch own the husband, the French the wife.  But they will always be displayed together.  Romantic!  And expensive: $174 million for the couple!

The first exhibit is here in Paris until June.  Then in the Rijksmuseum for 3 months.  Then time for some conservation activities (if needed) in the Netherlands.  Then a rotating exhibit between Paris and Amsterdam for 5 years each, then 8 years each.  And they will never be separated and never exhibited anywhere else.  No traveling shows for this couple!

Read more about it here:  http://www.louvre.fr/en/portraits-maerten-soolmans-and-oopjen-coppit-rembrandtan-exceptional-acquisition-exhibited-musee-du

They really are magnificent portraits.

I value my membership in the Amis du Louvre which gets me in  free and through a side entrance with no waiting.  Even on a Wednesday in May it’s a crowded place.  I went by the Mona Lisa on my way to the Rembrandt.  Peeked in at the crowd – mostly a photo of people holding up their phones!

Then  after I headed off for the Vermeer – only to find that area under travaux – work.  Closed until February.  Wait – February!?  I will miss it this trip, I guess.  But that part of the Louvre was not as popular.  I found a totally empty salle!

Only one person was painting – copying the art work – today.  But there were many students who were all sketching the hall itself.  Very precise.  Very detailed.  You can see their sketch pads on their laps in this photo.

But maybe the Louvre needs to invest some money in upkeep.

Towels were strewn over the floor in the reception area – leaks from the Pyramid?  Maybe.

And lastly, for Minnesota readers – you betcha! You should come visit me!